Emelia Rose Calderon
Emelia: to work/industrious (GOT)
Rose: kind/fame (honoring both grandmothers along with my maternal grandmother)
03/02/17

Now this little lady is my sassy child. We had always figured we would expand our little crew. So soon after Manny turned 1 we decided to try again. No sooner did we start trying that I found out we were expecting. Both of my guys were excited. Looking back Mia was making sure here entrance into this world would be remembered. I managed to get pneumonia during my 6th month. I tell you not being able to breath was the worse! From then I just could keep my immune system up. As we came closer to her due date it was Mardi Gras. The year prior we had taken Manny and I was determined to let him enjoy it. I was of no help as I waddled to the parade route, praise God for family! They passed my little guy around as I rested. I was now on maternity leave and this little girl still had not made her presence known. I managed to get bronchitis now and Manny had the flu. I just thought Lord take me! I was trying everything to get this baby out in between testing and ultrasounds at the hospital. Mia has a plan though, she knew that her great grandmothers birthday was on the 2nd of March and she was going to make a grand entrance. I went to bed with some mild contractions but awoke to them being much stronger. Had we not arrived when we did, I would have had a home birth. No sooner did the resident physician check me, I yelled ‘I need to push!’ Three pushes later into the bed there she was, yelling at the top of her lungs!
Elvin reacted it’s a girl!
Pre-k2
Sassy
Loves coloring
Reading books 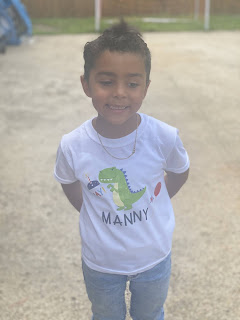 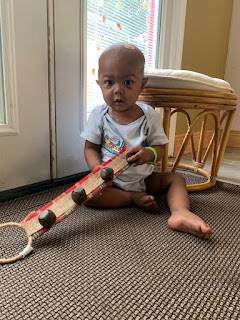